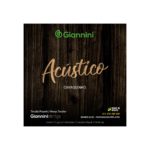 The Giannini strings Acústico series are perfect for you to get the best sound, clean and full-bodied, of your instrument. The cavaquinho strings Acústico GESCPA it is suitable for musicians who like strings with a heavy tension.

Formed by Copper and Zinc, it is a yellow colored metal. This alloy contains 35% Zinc and 5% other metals, and its color varies according to the percentage of Copper present in the alloy. On the musical strings they present a bright and very clear sound.