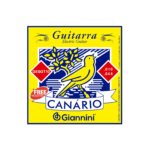 The Canário series is one of the most traditional by Giannini, as well as one of the most sold. The strings for six strings electric guitar Giannini Canário GESGT10 has a rounded tinned hexagonal steel core and coated with a 430SS stainless steel alloy, and it is the best cost benefit you will find in a string, without losing the quality or timbre of your sound.