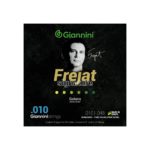 The Signature brings to you strings developed by the best musicians, with configurations and materials chosen by them to get the best sound from your instruments.

The guitar player Roberto Frejat is part of the history of Brazilian rock, either with Barão Vermelho or in his solo career. The Signature Frejatstrings, produced with pure nickel and with polished strings around the edges, brings to you the sound that Frejat uses in all his compositions.