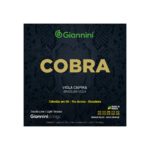 The Cobra presents all the versatility of Giannini strings. The strings for Brazilian viola Giannini Cobra CV82L is suitable for musicians who like strings with a light tension.

The Cobra CV82L is formed in its composition by 80% copper and 20% zinc, it is a light yellow metal. On the musical strings they produce clear and bright sound.