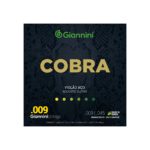 The Cobra series presents all the versatility of Giannini strings. The strings for acoustic guitar Giannini Cobra GEEWAK are coated with Bronze 85/15, suitable for musicians who like a bright, full-bodied sound and with great sustain.

Formed by Copper and Zinc, it is a gold-yellow metal. This alloy contains between 5 and 15% Zinc. On the strings they produce a bright, full-bodied sound with good support. Perfect for various musical styles.