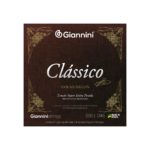 The Clássico is indicated for those who appreciate a pure and crystalline sound in their instrument with nylon string. Coated with Bronze 65/35, the Giannini Clássico GENWXPA is the best for those who like strings with a super extra heavy tension.