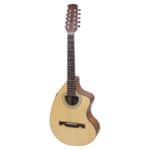 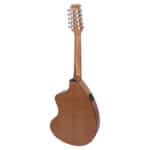 The Craviola series brings an icon of Giannini, the Craviola, now entirely produced in Brazil, with national woods and handmade!

One of the newest model in this series is the CRA 1VS CEQ NS, an electro acoustic 10 steel strings Viola Craviola with 36", with solid Marupá top; back, sides and neck in Cedar, Pau-Ferro fingerboard and 3-band preamp.

Marupá is a wood frequently found in the Amazon region, mainly in the states of Acre, Amapá, Pará, Rondônia and Mato Grosso.

It’s a wood with low density and texture of medium to thick, easy to be worked, which allows a good finish. The color can vary from whitish to slightly yellow or pink, with slightly darker veins forming very smooth regular designs, being exotic due to its clear, almost uniform general appearance.

Pau-Ferro is a wood often found in the states of Goiás, Minas Gerais, Espírito Santo, São Paulo and Paraná. It is also found in Bolivia.

It’s a density moderately heavy and very durable wood, with a color varying from light-yellow-brown to brown, usually with dark veins forming very characteristic and exotic irregular designs, reasonably difficult to be crafted, but allowing for a good quality finish.

With a different shape and unique sound, Craviola Giannini won the world and gathered fans around the globe. It all started with a simple idea, as stated by Paulinho Nogueira, “Even before playing the guitar I already liked to draw a lot. I even won an award at the Salão da Primavera in Campinas, for my paint work. So, I've changed my mind and became a musician, guitarist, and it gave me an idea to make a guitar that was designed by me. I did some drawings, and I was a great friend of Giannini, the guitar maker, and I send the draws to him, who thought that was a great idea. So, to summarize the story, Craviola was exported to the United States, Canada and England. Luís Bonfá, for example, recorded an LP at that time only with the Craviola. This gave me a lot of satisfaction. It is a guitar with a different shape. ”

Craviola is an exclusive product from Giannini, patented internationally. The name of the instrument was only born after the construction of the first prototype. As he had no idea what kind of sound alteration the unusual shape would provide, Paulinho only noticed that the sound was unique after touching the first model “I only got this idea even after it was ready. As it seemed a little of the harpsichord and a little viola, the evident name was born. In the United States they liked that name a lot, it went well for them. ”

A renowned guitar teacher, Paulinho Nogueira taught for many years and wrote methods that are still used today by many schools. Among his most famous students are Toquinho, Chico Buarque and Vinícius de Moraes. He recorded several albums, released in Brazil and abroad. Many musicians fell in love with and helped to consolidate their fame and identity in various musical styles. Among the most famous Craviola lovers we can mention: Jimmy Page (Led Zeppelin), José Feliciano, Andy Summers (The Police), Luis Bonfá, Bill Winters, Linda Perry (4 Non Blondes), Wander Taffo, Evandro Mesquita, Frejat, among many others.

Shapes available in this series

*Product subject to change in his features without notice