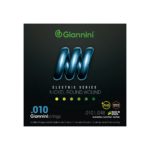 The Electric series brings all the sound of the Giannini strings to your guitar and bass. The guitar strings Giannini GEEGSTP10 a string with a plus, a heavier grip than a normal .010 string set. Composed of a steel core coated with Nickel, it produces a bright and aggressive sound that meets a wide variety of musical styles, being very resistant to oxidation and corrosion.